No posts has been found. Please return to the homepage.

Online poker is hot! Discover the poker rooms of our partners and the many variants.

Texas Hold’em is one of the popular variants of the classic poker game. The game is ideal for those who want to learn and also for novice players. A game of Texas Hold’em is played with 2 to 10 participants and 52 cards.

At the start of the game, each player is dealt two cards from the dealer. Only you may see these cards. During different game rounds, 5 playing cards are placed on the table, visible to everyone.

The player with the best card hand at the end wins the game. 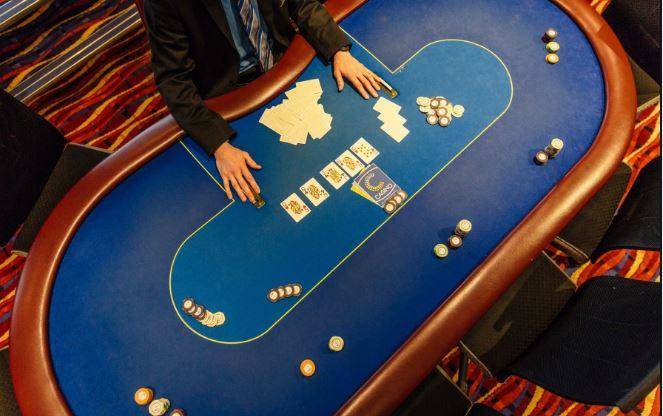 The hand ranking in poker

Each combination of cards in your hand is associated with a certain number of points. There are ten possible combinations, ranging from low point value to high:

A high card is the lowest possible score you can get in poker. Basically it means that you have not made any combination, but only have cards in your hand that are completely separate from each other. To count the points for the different players,

the highest value is taken into account. If players have a card of the same value, the card with the second highest value follows. If that is also the same, go to the next one and walk down the row.

A player with a one pair combination in his hand has two cards of the same rank and three side cards that cannot be combined.

If another player also has the same one pair, the highest side card counts for winning the round.

THREE OF A KIND

In a straight, you keep five cards in your hand that follow each other. The sign may be different. An ace can be used as a 1 to make an ace-1-2-3-4 straight, but can also come after the king to make a 10-jack-queen-king-ace straight.

If several players have a straight, the card with the highest value counts.

In Flush, the sign plays a role. You hold five cards of different value and an equal symbol in your hand.

With a full house you have three of the same and two of the same cards. So you make a combination of a three of a kind and a one pair.

With multiple players holding a full house card hand, the value of the three of a kind is decisive.

If it is also the same, then the value of the one pair decides.

FOUR OF A KIND

Four equal value playing cards in your hand? Then you’re in luck, because this means you can explain a four of a kind.

A Royal flush is a straight flush but with the five highest cards.

You have a Royal flush when you have the following combination in your hand: 10, Jack, Queen, King, Ace of the same suit.

The Gameplay in Texas Hold’em

Before the game begins, a player is dealt the dealer button. This means that this player is the dealer for this game. A dealer button is passed to the next player on the next game. The dealer gives each player two cards that the other player cannot see.

Betting with a small blind and a big blind

Betting in a poker game is done in the form of blinds. Blinds may vary from variant to variant and are agreed in advance. In Texas Hold’em, the player to the left of the player with the dealer button starts with a first bet: the small blind. The person to the left of this first player continues the game with a second bet: the big blind. A big blind is twice as much as a small blind.

The preflop: the first betting round

After betting by the first two players, the first betting round starts. The player to the left of the big blind starts. He can choose from different betting options:

Call, betting the same as the big blind.

Raise where he increases the bet amount.

Fold where the player does not bet. This means that he can no longer play for the pot. A fold is often made when you have been dealt a very bad card.

Check where the player waives the first bet. This is only possible if no bet has been made in that round. The turn for the first bet then goes to the person to the left of that player.

Bet where the stake is locked. The next players in the round must then automatically call (ie bet as much as the bet amount). Betting is only possible if no bets have been made during that round.

Each participating player in turn bets according to one of these three options. The first betting round is over when each player has bet.

flop and the second betting round

The dealer places the flop on the table: these are three playing cards that are visible to all players. Each player looks to see if he can make a good combination with these three cards with the two cards he is holding in his hand. Each player bets during this second betting round.

The turn starts when a fourth community card is placed on the table by the dealer, visible to all. As with any betting round, each player gets the chance to bet. Again, he can choose between calling, raising, betting, checking or folding.

The River starts when the fifth and last card is shown to the remaining players. All still participating players bet one last time.

The showdown is the last round of the game. Here the players show their best card combination. The player with the best hand wins the game and thus the pot that was played for.

Online poker is a frequently played gambling game. You notice this in the large number of variants that are made by game developers, both for the physical arcades and the online casinos.

Online poker can be played in a so-called poker room, where dozens of variants can be played. As a poker player you don’t get bored easily. Every week a new poker game comes on the market.

Hopefully you learned a bit from our explanation and if you feel like a game of online poker then you can certainly find an online casino on the list below to do so.

Where can you play online poker

Check out the cheapest tournaments

Almost every Belgian casino has progressive jackpot games in its arsenal and we list some of them.